Chancellor Dr Royden Somerville QC nominated Mr Willis for the Association for Tertiary Education Management (ATEM) Institute Award for Excellence in Leadership that was ‘presented’ during a ceremony over Zoom video conferencing.

The purpose of the ATEM Awards for Best Practice in Tertiary Education Management is to recognise excellence in professional management and administration by staff of tertiary institutions or directly associated agencies in the Australian, New Zealand and Papua New Guinea tertiary education sector, whether or not they are members of ATEM.

The recipients of the LH Martin Award for Excellence in Leadership are recognised for sustained activity which sets out to:

The award citation states Mr Willis “clearly demonstrated sustained, leadership across a long period of change in a large portfolio, affecting over 1500 staff. Alongside this, he has led and implemented an effective COVID-19 response,” Dr Somerville says.

Within a week of the pandemic lock down, students began learning online, staff were working remotely, and all essential services were operating across all five campuses. 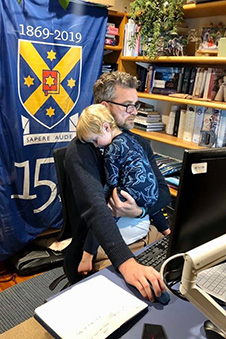 Although COVID-19 has been the single greatest disrupter to the University since World War II, it is already well on the way to recovery, mostly due to Mr Willis’s leadership. “He led our response while minding four children – one of whom was only two years old – while his wife Cheryl, a nurse, worked as an essential worker,” she says.

After Mr Willis became Chief Operating Officer in 2016, he helped the Operations Division reach its potential by conducting a broad portfolio assessment then introducing a shared vision and strategy, modern systems, more training to foster staff’s success, and more teamwork.

He enhanced communication, including encouraging people to ask about rumours and have their say, while promoting respectful responses. But his consistent driver is staff and students’ wellbeing.

“Stephen has four widely known leadership aspirations – courage, commitment, consistency, and compassion. He embodies these principles in everything he does, and he empowers his team to do the same. We are incredibly fortunate that he has chosen to work amongst us.”

He is process-driven, has a keen eye for innovation and enhanced productivity, and a warm, sincere manner. He has introduced both discipline and innovation into the University, including his “huddle” methodology that was one of the keys to our COVID-19 response, Professor Hayne says.

Governance group chairman, former Minister of Health and Tertiary Education Pete Hodgson, says Mr Willis is conducting the most comprehensive overhaul of the University’s assets in its 150-year history while retaining the confidence and respect of senior colleagues and staff – “a remarkable achievement”.

Mr Willis has also been pivotal to the orderly progress of New Zealand’s most expensive hospital rebuild. He aims for outcomes for the greater public good while promoting excellent, enduring links between health education and the public system.

“He quietly calls out sophistry, indecision and delay. I would struggle without him. Stephen expresses himself succinctly. When he speaks, many of us have learned to listen closely,” Mr Hodgson says.

Mr Willis says the phone call about winning the award was a complete surprise – he did not know he had been nominated and the overseas number made him suspect a hoax. Because the Australasian education sector is home to many great leaders, “it’s still hard to believe actually. I just did my job”.

“It’s been a crazy-busy year, for people to take time out of their busy lives to nominate me or support the nomination, I’m pretty blown away by it. I have to admit, I felt a bit emotional about it as well. It’s quite amazing – a career pinnacle really.”

“It’s a privilege to be a leader of such great people and such a big team providing a very wide range of services that keep the university operating on a day-to-day basis. I think for anyone in a leadership position, the responsibility entrusted in you is not something you should ever take for granted.”

While his role requires a range of technical expertise and skills, his focus since taking leadership positions has swung more towards being “a good boss, the best strategic leader I can be”.

Mr Willis has also always felt privileged to be the University of Otago’s Chief Operating Officer: “This is my ‘holy grail’. He is also quick to note that he feels very fortunate to be supported, and allowed to flourish, in his role by an outstanding boss, executive colleagues and a team of leaders who regularly leave him in awe of their ability and what they do.

The Association for Tertiary Education Management says it is the pre-eminent Australasian professional body for tertiary education administrators and managers – covering about 1,700 individuals and 80 organisations.

A “Time Travel” – Discover the Link Between Ancient China’s Civil...