The Pacific Ocean was part Willie Naitoko’s daily life as he grew up within a stone’s throw of the sea in Tonga’s capital city Nuku’alofa.

During those years he never developed what he considered a ‘special connection’ with the ocean, but that all changed in his final year at school.

“All my friends wanted to study health science, but I became interested in the marine environment, especially considering its importance for Pasifika countries and their communities,” Willie says. “I could see the opportunities in this space so decided to follow my own path.”

Last weekend Willie graduated with a Bachelor of Applied Science in Aquaculture and Fisheries, with a minor in Marine Science, in absentia owing to the cancellation of graduation ceremonies due to COVID-19.

“I was really disappointed the ceremonies had to be cancelled as I was really looking forward to celebrating my degree this way,” Willie says. “But now I am looking to returning to Tonga shortly to begin a job with the Ministry of Fisheries and start to put into practice what I have learnt and experienced through my degree.” 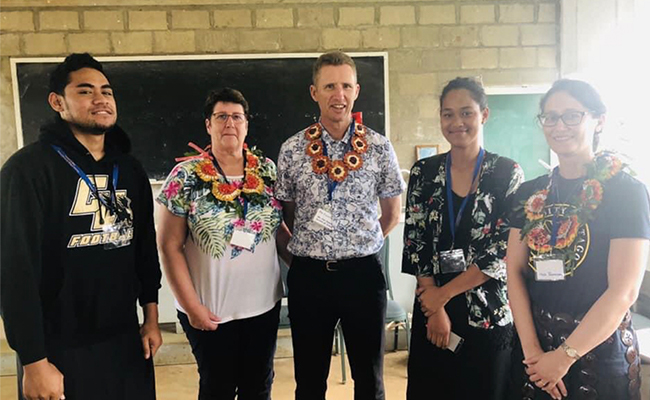 Willie’s journey to Otago was sparked by a 2018 visit to Tonga by an Otago team, including Sciences Pro-Vice-Chancellor Professor Richard Barker, standing next to his wife Lynnette, and Dr Mele Taumoepeau, at the right.

Willie’s journey to Otago was sparked by a 2018 visit to Tonga by an Otago team, including Pro-Vice-Chancellor Professor Richard Barker, Dr Mele Taumoepeau and Dr Losa Moata’ane, who were launching the Otago Tongan Alumni Network.

The team also took the opportunity to present to local schools, which is where Willie was introduced to the opportunities available for study at Otago. The following year, and with the support of a Tongan Ministry of Education scholarship in Aquaculture and Fisheries, he moved to Dunedin to commence his studies.

“I didn’t know anyone when I arrived, but it didn’t take long to find my community, and the whole experience of engaging with the different environment and culture has been awesome,” Willie says.

“I was the only Pacific Island student in the course, and one of the best things was gaining independence and improving my confidence as I navigated that.”

Willie made the most of other learning opportunities that arose too, including last summer working on an invasive seaweed research project with Marine Science PhD students Gaby Keeler-May and Namrata Chand, supported by a Division of Sciences summer scholarship Te Ngaru Paewhenua: The Landward Wave Science.

On his return to Tonga, Willie is going to maintain his connection with Otago through his involvement in a collaborative research project in partnership with the Ministry of Education in Tonga and co-led by Dr Moata’ane, Dr Gianna Savoie from the Centre for Science Communication, and Sally Carson, Director of the NZ Marine Studies Centre.

The Moana Explorers: Stories of Change project has developed marine and climate change educational resources for secondary teachers and their students in Tonga, including experiments and activities which will be incorporated into the marine science topic as part of the curriculum.

The resource kits include both print and digital resources, the equipment needed to carry out the activities and a companion video featuring Willie describing the activities in Tongan.

The kits were produced by NZ Marine Studies Centre and the Ocean Media Institute and will be used to explore cultural connections to the local marine environment and moana with a focus on climate change through practical experiments and creative exercises in sea-level rise, ocean acidification and ocean warming.

The resources will initially be distributed to seven schools in Tonga, and Willie will continue to be involved in the roll-out of the project by assisting them with the materials and activities, and helping to educate the bigger ideas which underlie the resources.

While looking forward to keeping these newfound Otago connections alive, Willie is also keen to see his parents in Tonga again soon following one and a half years of separation due to border closures.

“The pandemic has definitely had a big impact on me over the last year and a half, but I still feel very fortunate to have followed my interests and gained my degree at Otago which I can now put to good use in Tonga.”

Why you should start composting now

Next level training for retail leaders of the future